Adorable photos of Pygmy goats running around people’s homes continuously circulate the Internet (as a self-proclaimed goat lover, I’ve seen them all!). They’re irresistible, especially when they’re wearing pajamas. It makes you wonder: can these adorable little animals live inside?

Goats can live inside, but it’s NOT recommended. If you want to keep a goat inside, you will need to let it outside to graze and run around a little more frequently than you would an indoor dog. Goats are rambunctious and can get into trouble, so keeping them inside isn’t ideal.

Goats make great companions, but they can be rowdy kids. Let’s take a look at their care requirements and whether they’re allowed to be kept in the suburbs.

If you still want to keep a goat as a domestic house pet, you need to know what kind of care a goat requires. It’s possible to keep them in the house, but it isn’t recommended for several reasons. Goats are like dogs in some ways, in that they can be indoors but also need time outside to relieve themselves and release built-up energy.

American Pygmy goats, which are also called African Pygmy goats since the breed is derived from the West African Dwarf goats, are the most popular goat to keep as a domestic pet. They’re small, light, and incredibly cute – the perfect combination for a cuddly companion. Nigerian Dwarf goats are also used as pets, although they’re not as common as the Pygmy.

Pygmy goats can weigh up to 88 pounds (40 kilograms) and grow up to 20 inches (50 centimeters) at the shoulder blades. The size of these little guys isn’t much of a concern because dog breeds like the Great Dane exceed the weight by almost double.

Pygmy goats stay small, so they can’t outgrow the space you have for them in your home.

Goats shouldn’t live alone, even if they’re living with you. If you want a pet goat, it must be two pet goats. Goats naturally live in herds, and living alone can make them unhappy, even if they get to spend a lot of time with humans.

Some cities like San Diego require you to have two goats. Not every city is as proactive about goat keeping laws, so your city’s rules might not be as specific. But, it just goes to show that goats truly cannot live alone, so don’t consider having a pet goat if you can’t have two.

The necessary components for a good outdoor area include:

Goats are playful animals – they like to jump and run and get into things. Much like toddlers, they need constant entertainment, or they’ll get bored. Goats also love to climb, so you’ll need some things they can climb on in their outdoor area.

Their bubbly personalities aren’t great for indoor living. Running and jumping in the house is to be expected, and so is climbing. Remember, you’ll have to have two goats together. If you’re not keen on the idea of a couple of kids climbing on your kitchen table, you might need to make preparations for the goats to live outside full time.

Where Can Goats Be Kept as Pets?

These are the steps you need to take to find out if you can keep pet goats where you live:

What Breeds of Goats Can I Keep?

Miniature goats are the best to keep as indoor pets if you are still thinking you want to keep them in your house. They’re small enough to keep indoors and won’t cause as much damage as larger goats will, but remember that their size won’t stop them from causing damage.

Pygmy goats are the most popular breed to keep as pets and have been in the United States since the 1950s. They are very compact,well-muscled animals and have a disproportionately large body compared to their legs. However, since they’re so popular, they should be pretty easy to find for a decent price.

Nigerian Dwarf goats have been in zoos long before they became recognized as a breed in 2005. They were at first listed as endangered, but in 2013 they were taken off the list.

The Nigerian Dwarf’s body parts are more proportional, similar to body proportions of regular dairy goats. They’re another popular breed to keep as pets because they’re shorter and lighter than Pygmy goats. They might be a better option to keep indoors. However, they’re a bit more active and are ready to breed at just a few months old.

Other breeds that aren’t as popular include:

A goat can technically live inside with you. However, they can be a nuisance to live with, so they aren’t recommended as indoor pets. They will climb and destroy your furniture, run and jump around, and graze on whatever they can get their teeth on.

If you keep a goat as an indoor pet, you still need to provide plenty of space for it outdoors. Make sure the fences are sturdy and that there’s a shelter for the animal to stay in.

It’s crucial that you follow all the local laws. Laws are left to local jurisdictions to decide, and HOAs might have their own rules you have to abide by. Be sure you know all of the local laws before obtaining a couple of goats. If you want to start a small homestead, you might have thought about getting goats. Do they make useful additions to your home, and what would it be like? You might even ask yourself, Do goats make good pets? After all, farm animals can make fantastic pets as well as perform tasks for you. Let’s answer a… You might have noticed that the urban chicken business has exploded this past decade. Many people raise chickens for fresh meat and eggs. But did you know there is an expanding market of people looking for pet chickens? You might be thinking this is impossible. They are large birds, after all. But a part of…

Highland cows are a distinctive cattle breed with their unique long reddish hair. They are even cuter as calves and look like they can make wonderful family pets. Highland cows make good pets depending on how you weigh their pros and cons. Some pros include their excellent temperament, trainability, and their other benefits like providing… The world of backyard poultry has boomed in the last ten years. Many people are learning that these “farm” animals have a lot more to offer than just meat and eggs. There are even famous Instagram ducks that have thousands of followers. But do ducks make good pets? How does this work? The best way… 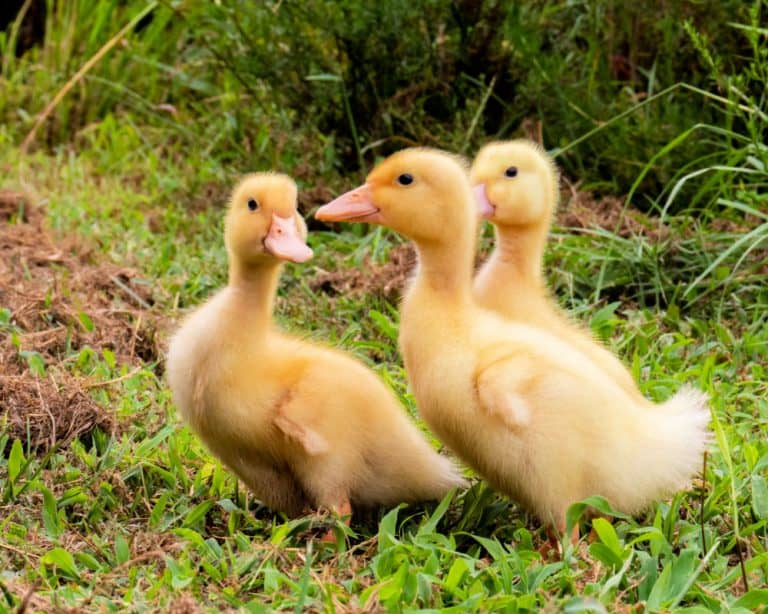 There is no denying that ducklings are the cutest little balls of fluff around come springtime, but they are also some of the messiest little critters! No matter how cute they are, you will be more than ready to move them outside when the time comes. However, you want to be careful to ensure that…